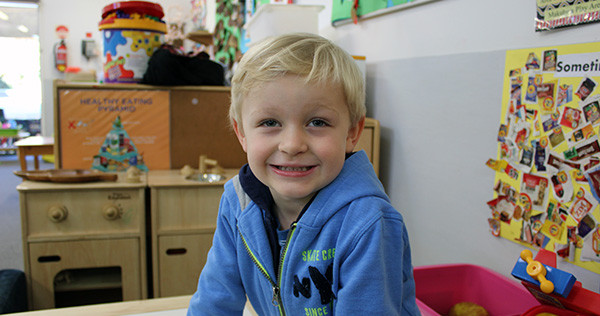 Have you ever wondered who this little boy is? Lucas Browne looks like a happy kid enjoying a day at the beach, however he is the poster boy for the Targeting Cancer website for a reason.

This is Lucas’s story, as told by his parents Tim and Amelia Browne.

In July 2014 , when Lucas was two years old, we noticed he had developed a sudden constant head tilt. Lucas’s childcare teachers also noticed this and our concern led us to consult a local GP. With no diagnosis, we then spent five weeks travelling back and forth to Mona Vale Hospital, under the care of a paediatrician, trying to get a diagnosis.

The period we spent at the hospital was worrying, we were in and out of the emergency department as Lucas had random bouts of vomiting and high temperatures. He recovered every time though and we were sent home. Lucas had weekly appointments at the hospital undergoing blood tests and all sorts of examinations. In spite of this, Lucas still managed to run happily up the corridor showing the medical staff how active and cheerful he still was. He had a healthy appetite and sat happily consuming all the snacks we packed him for these visits at the hospital. By all indications, Lucas was a healthy boy except for the very obvious head tilt.

Five weeks later and after numerous tests that suggested nothing was wrong, we were then referred to an eye specialist. Lucas didn’t enjoy this particular examination and it seemed to take longer than usual – it appeared the specialist was onto something, not that we knew what it was at this stage! We understood that a nerve in his eye didn’t look quite right and we were worried that he might have to wear glasses.

At the end of the eye specialist appointment on a Friday, Lucas was booked in for an MRI at Westmead Children’s Hospital for the following Monday. Lucas was not well at all on the day he had the MRI — the 4th of August 2014. The test seemed to take a long time to complete. We were called in to see the specialist and to our shock, were told that a large tumour had been found in his brain.

It was all systems go from there on for most of that night. Lucas had surgery the next morning to remove the tumour. The tumour was the size of a golf ball. We were told that the biopsy showed it was ‘very’ malignant. Our world was then consumed by Anaplastic Ependymoma — a rare and aggressive type of brain (and sometimes spinal cord) tumour that Lucas was afflicted with. Lucas spent the next 10 days in hospital recovering from the surgery.

A few days after Lucas had his surgery and we had a meeting with the doctors, surgeons and oncologists about what was next for Lucas and his road to recovery. The news was not as positive as we had originally thought. We were on a bit of a high from the success of the surgery but now we had to face the lengthy follow up treatment plan. We had big decisions to make about what course of treatment was needed, and other additional treatments that the doctors were asking us to consider in the name of medical research. There was a lot to think about especially after we had just been told that Lucas only had a 50% chance of making it.

Selecting the best treatment option was one of the hardest decisions we have ever had to make. Of course we would do whatever was needed to do to make sure we gave Lucas the best chance. We researched and got second opinions from GP’s and other specialists. We also spoke to other parents who were going through chemotherapy. Finally we made the decision to decline the medical trial and go with the preferred and proven treatment of radiation therapy only.

Initially we had limited knowledge of what was involved in radiation therapy but we were quickly put at ease with the method of treatment. The developments in the technology in the last 10 years have been amazing and once we were told how accurate and safe radiation therapy was, we were happy with the decision we made. We were advised of some side effects that Lucas may get in the future such as hearing loss in his left ear which we could deal with, and the possibility that his growth would slow down, which could be assisted with hormone tablets. Neither of these side effects have been detected in Lucas’s progress to date.

Two weeks after the brain surgery, Lucas had a central line inserted that could be left in the body for a length of time. The purpose of the central line was to easily give a general anaesthetic to Lucas each day while he underwent radiation therapy. This was so he remained completely still for the treatment to his brain. He began six weeks of radiation therapy on the 1st of September 2014. It was difficult to see Lucas go through these sessions five times a week and there were lots of tears (from all of us). But the turning point came about after two weeks of radiation therapy. For the first time since everything began, Lucas finally smiled and waved at us as he went into what he called the ‘big machine’, which was the linear accelerator that delivered the radiation therapy.

It was a challenging and emotional time for all of us and we couldn’t be more grateful to the staff at Westmead hospital who provided ample support and care. You can’t imagine the relief for us at the very last session of radiation therapy and we couldn’t have been happier when the central line was finally removed. Bathing Lucas that night, without the tube attached to his body, was an absolute pleasure for him and his big brother!

Since that last day of radiation therapy on 13th October 2014, Lucas has been having MRIs of his brain and spine every three months to monitor and to look for any signs of the tumour returning. After the first year of MRIs, the radiation and medical oncologists were pleased with his progress and then concentrated on MRIs of the brain only as it was anticipated that the spinal cord was not affected or going to be affected.

In terms of his development, the oncologists were also happy. None of the possible side effects of radiation therapy were evident. Lucas was progressing extremely well and was proving to grow and develop normally – matching other children his own age who have not had surgery or radiation therapy.

In the second year of his follow up appointments Lucas has continued to progress well. Last December 2015, Lucas had a hearing test and the audiogram results showed that Lucas had normal hearing in the 20 decibel level. All of his MRIs have been reported clear and any potential side effects including possible hearing loss and a slower than average growth rate have not been evident.

Lucas turned four in May 2016 and had his regular check-up as well as his immunisations. His hearing, sight and an overall physical examination were normal. We hold our breath every time he has an MRI or examination and to be honest, the anxiety we feel, still isn’t easy to deal with.

Looking back at what we went through, we know we made the right decision to have Lucas treated with radiation therapy. Lucas could function like a normal boy during the treatment. This would not have been the case if we had included the chemotherapy. We are not saying chemotherapy is not a good choice of treatment or doesn’t have its place, but for Lucas it was not the preferred treatment.

For Lucas, having radiation therapy was easy and pain free. He was anaesthetised through his central line so it was not stressful for him in any way. He slept through the entire process and when he woke up it didn’t take him long to be back to his normal self. He was able to snack after he woke and he was eating his packed lunch in the car on the way home. Lucas would spend the rest of the day playing and getting on as if nothing had happened. He was not affected from the anaesthetic or the treatment and even slept well at night.

I wish I could say the same about us. Watching your little 2 year old boy’s reaction as his sees his bed being rolled into the radiation therapy bunker, and the machines that monitor him as he sleeps, brought us to tears. It was even harder to watch his eyes roll back as the anaesthetic kicked in and as he was swiftly removed from our arms and prepped for treatment as we were ushered out with a bit of urgency.

While the radiation therapy was the better treatment for Lucas it was hard on us as parents, driving an hour each way to the hospital five days a week, watching him being anaesthetised and secured to the bed with his mask so the machine could work to its pin point accuracy and then play the waiting game while he woke again before being able to go home.

It was always a relief to hear him crying as he woke from the anaesthetic, we knew it wouldn’t be long until we could see him again. The longer the radiation therapy went on, the quicker Lucas recovered from the anaesthetic and towards the end of the treatment we had reduced our hospital visits to a six hour door to door exercise.

Looking back now after 18 months and Lucas is cancer free, it was all a small price to pay. He was never sick from the treatment. As the time since treatment began increases, side effects that could have occurred are not evident in any way. In the last 18 months Lucas has grown and developed into an energetic young boy.

Lucas’s recent follow up visits with the oncologists and other doctors have all come back with highly positive reports. We are so proud of how Lucas has coped with the treatment.

We could not be happier with how well Lucas is continuing to prove to us that he has won this battle! It has been two years since the diagnosis and we are keeping our fingers crossed for that five year milestone, when he will be considered to be in the all clear. As unfortunate as we were to have experienced the events we have been through, we feel so privileged and lucky to have a happy and healthy Lucas by our side now.