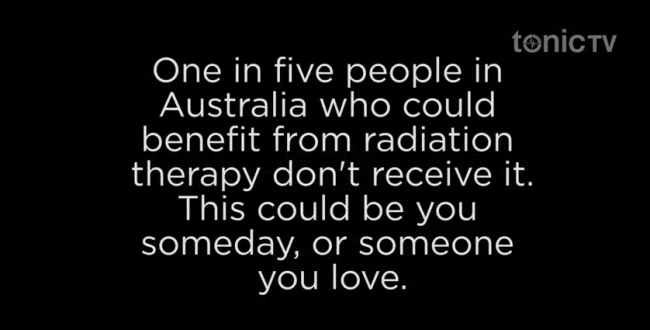 The Targeting Cancer Campaign team, worked in collaboration with Tonic Health Media (THM) to produce the documentary on radiation therapy called Below the Radar, with the assistance of The Royal Australian and New Zealand College of Radiologists (RANZCR).

The documentary shows real patient stories about the value of radiation therapy and delivers the campaign messages about safety, effectiveness, cost effectiveness and the sophisticated technologies involved with radiation therapy. Below the Radar was broadcast on ABC News 24 on 6 February and 7 February.

The documentary has been edited into four shorter videos, which will be played in the waiting rooms of general practitioners across Australia, through Tonic Health Media, for the next two years.

Episode 2: The evidence for radiation therapy’s effectiveness, the latest advances in technology; and how it’s often a less traumatic option than surgery or chemotherapy.

Episode 3: The misconceptions about radiation therapy

Tonic Health Media (THM) is an initiative of respected health broadcaster, Dr Norman Swan, and is an evidence-based patient education and entertainment system for GPs’, other clinicians and hospital waiting areas. The content produced by THM is designed to improve health literacy and facilitate better outcomes for patients, doctors, and the Australian health industry. Targeting Cancer is fortunate to have entered into a partnership with THM, with generous support from Varian Medical Systems, to promote radiation therapy to the GP communities.